Classes and Object in OOP in Python Programming

Classes and Object in Python: Both classes and object are the concepts of Object-Oriented Programming.
1). Class: A class is nothing but just a group of attributes and methods. Classes are user-defined. We can use all the concepts of procedural programming in class.
You will also get to know the difference between object and class in python by the end of this guide.

Attributes: We already learned about variables in our previous topics. Same like variables, attributes are represented by variables that are used to store some value or data.

Methods: We already learned about functions. Same like functions, methods perform action or tasks when needed. It is very similar to functions.

Classes may consist of the following Entities 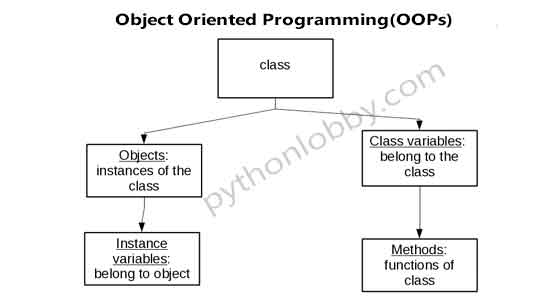 About Objects & instance variable, we will discuss just after finishing our classes topic.

Syntax of creating a Class:

Keyword “class” followed by class_name with round bracket: is used to define a class. Class_name may be anything. Example:
class Abc:
#body of class

So till now, we have seen the syntax of how to define a class. Let’s create a class:

In example 1, we defined an empty class Test. But to use class or to use the attributes of class we need an Object. 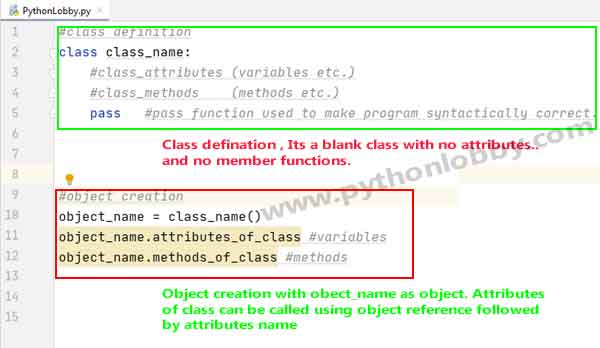 Above is just an example of how to create an object of the class and how to access the elements or attributes of the class. Below is a simple example to understand the concepts more clear i.e. difference between object and class in python.

Note:
Here many of us are assuming that object_name is an object, but this is not that. Actually, it’s just a variable, and the real object is class_name(). Note down carefully, if the name of a class is XYZ then the object of that class is always XYZ(). We cannot use an object directly that’s why we use an object_name or variable. In other words, you can say that an object is nothing but just the blueprint of a class.

Now we will see some real example of classes and object.
Example 2:

This is just a simple program of class with having only one attribute ie. class variable.

Example 2: Program of class with having one class variable and class method.

3). Self: Here “self” is the new thing for us. Actually self is nothing but just a placeholder, where objects points. Let me clear you. As we already know that we can create more than one objects of any class. In fact, even we have only one object then also “self” is used but more used when number of objects more than one. 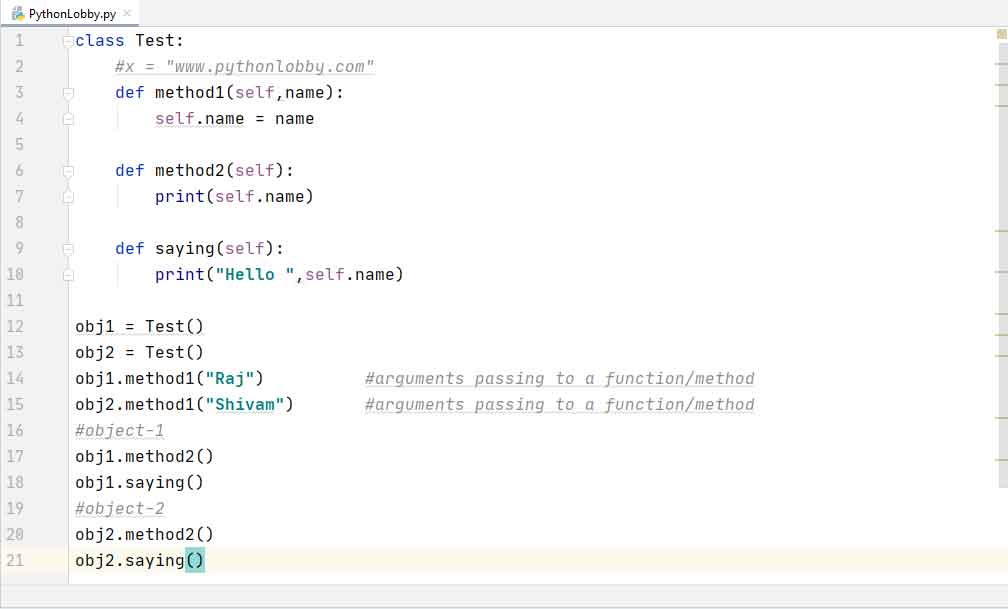 Here we have created three methods method1, method2, and saying.
Here why we used two objects. We used two objects because we are passing two names. If we use only one object and pass two values like this: 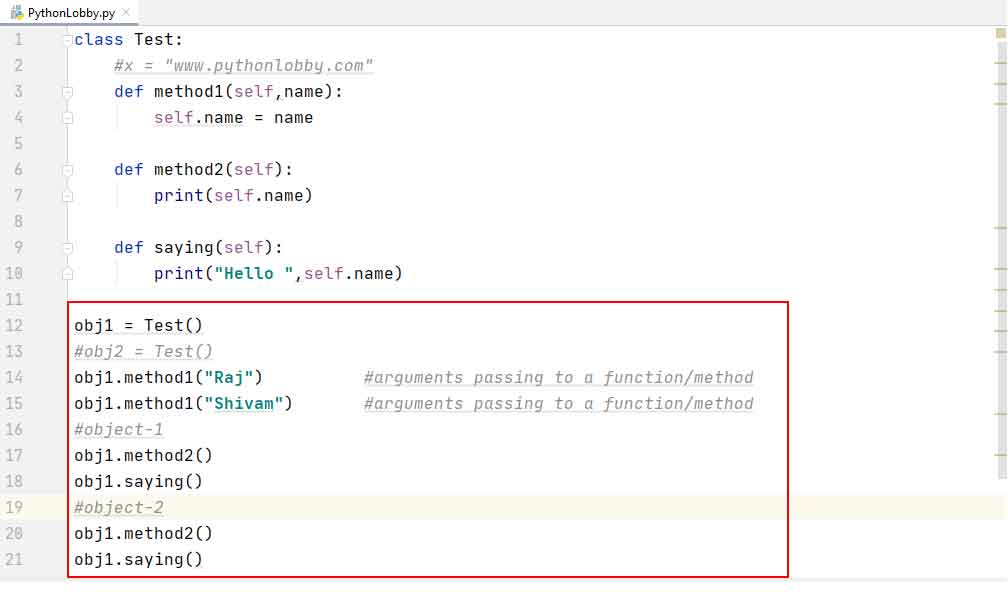 Then our output is:

Self stores the object reference or the address of objects. If we create two objects then it has two different address. When we created two objects with value passing. Then compiler stored both values at different object locations. That’s why it returned both values. But in the second example, we created one object and when we stored the first value at that object location it is successfully stored but when the second value passed then it replaced the first one.

Important Note:
The object name obj1 is always storing some value, and that value is the memory location where our object is stored. If you want to know just use print(obj1) to know the memory location of your object. It will return you something like this <__main__.Test object at 0x00DA3FB8>. Your output will not be exactly like mine as memory locations always vary.