For Loop in Python Programming with Examples

Python For Loop: For loop in python is mainly used for definite iteration over specific elements or statements again and again while the condition is True. Definite means limited intervals.

Here the var is just a variable name used for iterating over an element (sequence). The for loop continues iterating until it reaches the last element of the sequence.

Let’s see some example to understand the concept better

Below is the given Flow Chart for a better understanding 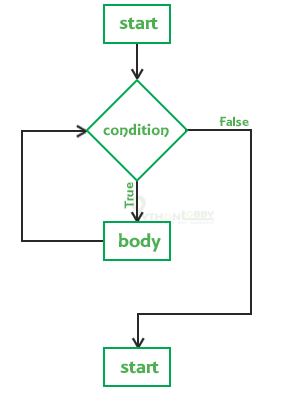 As discussed before, that in C/C++ or other old languages, the syntax followed for for-loop is as follows: for(start;  end; steps). But in python programming the syntax is different. We use python’s inbuilt range function to meet the complete functionality of for loop.

Python is popular for its large number of inbuilt functions and libraries. Range() is also one of its function. We can use the range() function in three ways:

(ii). Range(start, stop): If we want to generate numbers from 2 to 10. Then we can easily generate it by using the range() function. But here the difference is we can use the starting as well as ending index. But in the previous one, we cannot use the starting index.

Exercise 1: Write a Python Program to print multiples of 2.

Nested for loop in Python

We can also use nested for loop in python same as we already studied about nested if statements. Nested for loop is nothing, it just one or more for loops present inside other for loop.

For Loop with else statement