While Loop in Python: While Loop is used to execute a block of statements again and again or we can say that repeatedly until our given condition is True. Previously we learnt about for loop, both for loop and while loop used for the same purpose. While loop stops execution when the condition inside while loop returns False.

Now the question arises, that if the purpose of while and for loop is the same then what is the use of while loop. Difference between for loop and while loop is that, when we are not sure of the numbers that how much time or long loop execute, in that case, we use while loop.

And when we are sure about the numbers that how many times we need to execute the loop, in that case, we use for loop.

Flow Diagram of While Loop: 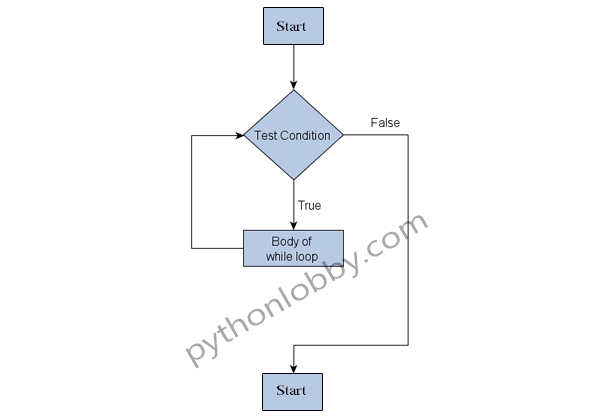 Execution Flow of While Loop: Code or statements inside while loop will execute only if the condition is given in while loop is True. If it is False then code/statements do not execute and the loop is terminated.

What is nested while loop in Python?

Note: If the condition inside while remains always true, then in that case an infinite loop will execute that will never stop execution.

Example of infinite while loop:

What is the difference between for loop and while loop in Python?

Example 1: WAP to display factorial of a number using for loop.

Example 2: WAP to display factorial of a number using while loop.