Operators and Operand in Python Programming

Operators in Python: Like other programming languages python also implements the concepts of operators. Operators are special symbols that represent operations like addition, multiplication etc.

Operand: The values required by the operator to operate is called operand.

Following are some valid expressions:

When the variable name appears at the place of an operand, it is replaced with its (variable) value. Like as you see above three examples are there. The first one is very clear ie. 32+20 but the second one little bit confusing because it’s showing hour-1. It does not return any meaning here, what does hour indicate?. I will let you know that here hour is a variable whose value can be 2,3,4 or anything. It is more clear in the example below:

Priority of Operations: In most cases, sometimes more than one operator appears in an expression, In that case, the order of operator evaluation depends upon rules of Precedence. Python follows the same precedence rules for its mathematical operators that mathematics does. We follow the PEMDAS acronym to remember that order of operations.

Types of Operators in Python 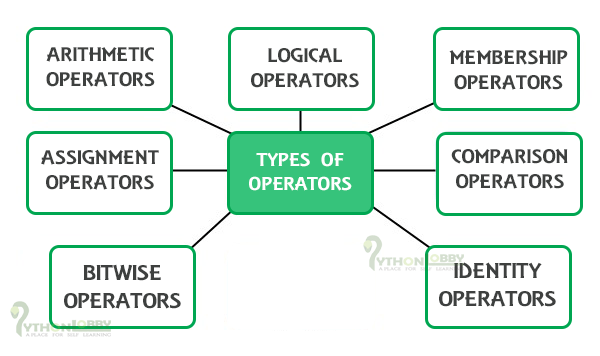 There are many assignment operators in Python i.e x *= 5. This operation is same as x = x*5

Logical operators in Python are used in combining conditional statements. It also returns True or False based on conditions. It works on the principle of Logic gates i.e. and, or, not. Find the list of available logical operators in the below table.

Identity operators in Python are used to compare the objects. is and is not are the identical operators in Python. It does not check the equality but it checks the same object with the same memory allocation. Two equal values do not mean that they are identical. It returns True or False as an output.

Python membership operators are used to check whether the value or sequence of values are present in an object or not. i.e. (string, list, tuple, set and dictionary). It returns the result in boolean value i.e. True or False. in and not in are the membership operators in Python.