Python List Methods: A list in Python programming is a kind of data structures or it is an ordered set of values. Each value in the list identified by an index. Values stored by the list may be an integer, string or float etc. Values inside the list are called elements.

List length: To find the length of a list or to check the length of elements of a list, we use the list in-built method len(). The len() method return the length of list. This is one of the powerful concepts used in a list. It makes very easy for solving puzzled problems without writing complex code.

Operations on list: There are many operations performed on list in Python. We will discuss it one by one with examples. Some common operations are using operators +,* etc.

The above given example is the common example on list operation using plus(+) operator. It joins the list. Similarly * operator repeats a list a given number of times.

2). List are Mutable: We know that strings are mutable. Mutable means we can change their values or elements. Let’s see an example to understand How we can change the values of List in python?

(ii). Multiple Changes at Once: We can also update multiple elements of lists at once using the slice operator. Let’s see one example:

(iii). Removing elements: We can remove elements from a list by assigning an empty list to them.

3). Adding Elements: We can also add elements to a list by squeezing them into an empty slice, at the required location.

4). List Deletion: We can also delete elements of a list if required. Python provides an alternative, that is more readable. del is used to remove an element from a list in python.

We can also use the slices operator for multiple list elements deletion.

5). List Membership: Operator ‘in’ is a boolean operator that is used to check membership or existence of elements in a list and return True  or False as a result/output.

Note: If elements exist in the list then the output is True else it returns False.

6). Lists and for loops: If you don’t know about for loop then Please refer to this article for loop.
The for loop also works with lists. The common syntax to use  for loop in python is:

For loop is used to iterate over the list of sequence. Suppose we have a list x = [‘x’,’y’,’z’] . Now if we use for loop on our list then it will iterate over all the elements of the list one by one. Please follow below given example.

What is range() function in python?

The above example print all the even numbers between the range zero and 19.

7). Length of List: In python, there is a function that is len(). It is used to find the length of a list in python. Let’s see an example that how to use len() function.

8). Object and Values: Object and values are one of the important concepts of any programming language to understand.

if we execute the below-given assignment statements,

There are two possible states.

Basically, every object has a unique identifier.
In python, an id() function is used to obtain the identifier. We can know the identifier of a & b and also we can tell whether they refer to the same object.

Important: We can see that we got the same identifier twice, it means that python created only one string and it makes referred both variable a and b to the same string.

It shows that a & b may have same values but they are not referring to the same object.

9). Aliasing in List: As we discussed above that variables may refer to objects, what if we assign one variable to another and that both values referring to the same object:

Let’s understand with the help of example

In the above case, our state diagram/figure should look like this: 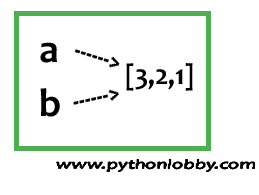 Note: What we did? we given two different names to the same list ie. a&b , now we can say that it is aliased. If we do any change in any of one list, then it may also affect the other list.

10). List Cloning:  List cloning is also a type of operation on list. Cloning means making a copy. Sometimes we need to copy a list and want to modify the copied list but do not want to make changes in the original list. In that case, we use the concept of cloning.

We use slice operator, the easiest way to clone a list:

In the above example, the second element is a nested list. If we print x[2], we get [‘www.pythonlobby.com’]. If we want to access elements inside the nested list, then in that case we need to proceed with two steps:
x[2][0]

13). Strings and Lists: In this topic, we will learn some functions of string ie. split(). The split function is the string function. It is used to break a string and returns the result/output in list format.